I have recently come across several Twitter debates and discussions regarding the relationship between Libertarians and the Alt-Right. A common consensus, which I support, is that many Libertarians have been converted to Team Pepe the Frog before and over the course of President Trump’s first months in office.

The term alt-right is not well-defined. Richard Spencer, a White Nationalist and former Libertarian, coined the phrase, and Hillary Clinton gave a speech warning the country about the group in August 2016, barely two months before Election Day. But it’s more complicated than White Nationalism. I plan to write a more extensive piece explaining my perception of the Alt-Right (and already outlined what I interpret their positions to be in this piece), but here is a quick breakdown of what I believe to be their three main factions:

Matt Lewis presents several theories for the Libertarian to Alt-Right “pipeline” in an op-ed for the Daily Beast. He first mentions that both groups “tend to be anti-interventionist in foreign policy.” That’s true, and it may also explain why many “Bernie Bros” turned out for Trump. I’ve recently mentioned that anti-interventionism is my top political priority, and Hillary Clinton’s ambitions overseas, particularly in Syria, are why I preferred Trump over her (though I voted for Gary Johnson).

Lewis then calls out the Ron Paul Revolution and quotes Reason editor Nick Gillespie citing Paul for “simultaneously… positing this very libertarian worldview, but then he’s also speaking to people’s fears and anxieties.” Although Ron Paul’s policies are antithetical to populism, his rhetoric mirrors Trump in that it stirs the masses.

I think this connection is weak as politics is always little more than a game of who-can-rile-up-the-most-people. It’s the same reason the Democrats have talked more about Trump than their own policies ever since Trump became a serious contender.

Personality is where Lewis turns next:

“Some of the people drawn to libertarianism are predisposed to be seduced into the alt-right. In this regard, they are merely passing through a libertarian phase. ‘Libertarianism is an unpopular view. And it takes particular personality types to be open to taking unpopular views,’ explains Kevin Vallier, an associate professor of philosophy at Bowling Green State University, who writes for the blog Bleeding Heart Libertarians. ‘Some of these personality types are people who are open to new experience, love the world of ideas and have a disposition for independent thought. However, some of these personality types simply enjoy holding outrageous and provocative views, who like to argue and fight with others, who like insult and… shock.’”

I have never met a Libertarian who simply goes with the flow and adopts the safe, popular, happy-side viewpoints of the moment. It takes time and effort to see Capitalism as beautiful and selfishness (in a Randian sense) as something other than unpalatable, so unless one is taught to be Libertarian at an early age, I imagine that a predisposition to disagreement is needed for one to see the light. Alt-Righters name “The Establishment” as enemy #1, so contrarianism is evidently up their alley too.

What I see as the strongest point in Lewis’s piece comes from David Boaz:

“Some people may become libertarians because they’re angry. For a while, it’s enough to be angry at the government. But ultimately libertarianism is about peaceful cooperation―markets, civil society, global trade, peace―so it just isn’t angry enough for some people. Racial intolerance is a way to be angry at the whole world. And I think you hear that in some of the alt-right types.”

Although I have a hard time convincing left-wingers of it, compassion, love, and respect for human life are what brought me to Libertarianism. Admittedly, I’ve always been a rebel and harbored some anger towards authority. But destruction is not what I am after. Regardless of its actual success, my blog’s purpose is to convince left-wingers to adopt Libertarian principles in order to make the world a better place. Although attacking the establishment is sometimes my chosen means, peace, prosperity, and equality in the eyes of the law have always been my ends.

This is not true of all self-identified Libertarians. For example, some Libertarians oppose a $15 minimum wage because “burger-flippers” do not “deserve” it. But this is not the Libertarian way. What we believe is that employers and employees should retain the right to negotiate an exchange of payment for labor without the government arbitrating the appropriate terms. We do not want anyone outside of the exchange itself making these decisions, and we hope that both parties can find a deal that results in a happy handshake.

Perhaps many Libertarian defectors to the Alt-Right were LINOs (Libertarians In Name Only) to begin with. This kind of confusion happens in politics often. Left-wingers and the heads of many multinational corporations often support strict regulations in industry. The former group thinks regulations will make a more equal world with a cleaner environment while the latter thinks regulations will give them an advantage over their poorer competitors.

While Lewis’s column is insightful, I think he misses a major cause of Libertarians going Alt-Right. Recently, I was lucky to have a quick Twitter exchange with Reason contributor Sikha Dalmia, one of my favorite Libertarian thinkers and writers. In my opinion, Dalmia is currently suffering from a bit of Trump Derangement Syndrome. This is not to say that she is wrong to oppose Trump in any way whatsoever. But Trump’s election has caused some to fall victim to the Cognitive Dissonance and Confirmation Bias innate within all of us, and I think Dalmia tests positive. In this instance, however, Dalmia was very open to my theory. Here is our exchange: 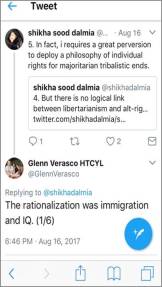 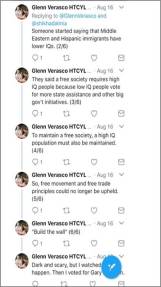 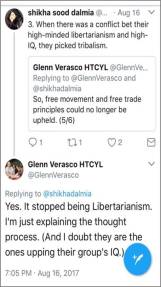 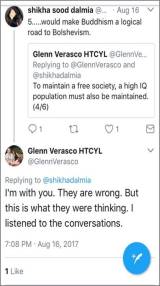 I was as blind to the Trump phenomenon as most until March 2016 when I wrote this piece. Then I witnessed the Libertarian to Alt-Right metamorphosis take place online. Living abroad and without television, I kill most of my free time watching videos on YouTube. I watched principled Libertarians (perhaps Stefan Molyneux most fervently) become convinced that their country, freedom, heritage, language, economic prospects, culture, and, for some, women and genetics were about to be taken away from them if they did not act fast.

I admit that some of the Alt-Right rhetoric has made me think, and I feel some camaraderie in our joint opposition to the Left. But I have held onto my Libertarian principles nonetheless. While most Libertarians are repulsed by the idea of being associated with the Alt-Right, I think it’s important to keep in mind that we are just a few stupid thoughts away from being on the same page. If we want to bring Alt-Righters back to the light, we should try to understand them first.