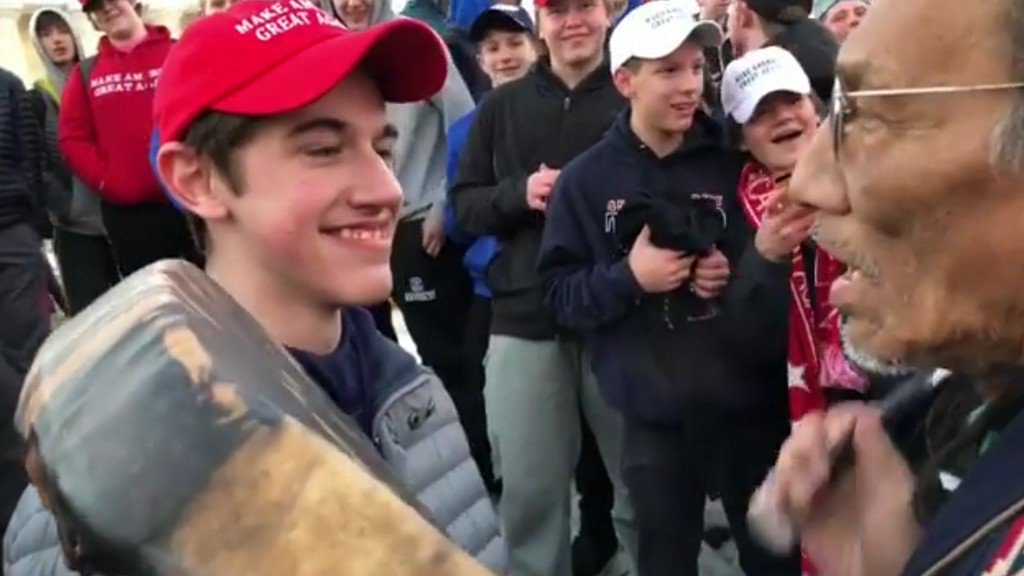 Unfortunately for some, the initial video in question, like most videos, neglects crucial and extenuating context.

In the video that went viral on Twitter, a lone Native American man can be seen banging on a drum and chanting a Native American hymn or song. Directly in front of him stands a white teenager in a MAGA hat. The teenager, whose face is terribly punchable, remains still with an irritating grin plastered on his mug. Surrounding these two are dozens of other teenagers bouncing, cheering, laughing, and clapping to the rhythm as well as some individuals who appear to be with the Native American man.

I've seen that look before — on the MAGA boy's face as he taunts a participant from the Indigenous Peoples March. Fueled by ideology and a desire to dehumanize, it frightens me and reminds me of other cruel youth groups from history.

The clip spread online with captions and explanations suggesting that the boys had instigated the situation. The man was identified as Nate Philips, a Vietnam war veteran, and the boys were identified as pupils of Covington Catholic High School, which is in Kentucky.

It was at this point that a hate mob was born, and all the usual suspects latched on to the conglomeration. Obviously, left-wing identitarians, woke celebrities, blue check marks, and anti-Trump radicals pushed the hardest, but cowardly Conservative pundits and journalists joined in too.

Next came doxxing and explicit threats of violence towards the boys and platitudes of admiration for Mr. Philips. What never came, at least out of the burgeoning NPC mob, was skepticism. I guess some realities are just too convenient to question.

More video of the situation began to emerge, and it became clear to anyone willing to open their eyes that the situation was far more complicated than the mob would permit for consideration.

One video shows that it was Philips who approached the boys, not the other way around. As the boys shout their alma mater wildly, something teenage boys (who are stupid) tend to do, Philips can be seen walking towards them with his drum:

I’ve spliced together cell phone footage from this event, and this student’s account appears to be accurate. Check out the thread below for the sequence of videos: pic.twitter.com/FSQsGkcCBg

As one student who was present explains, the boys’ initial thought was that Philips was making “a cultural display,” and they decided to join his chant. They then became “confused” after sensing hostility on Philips’ part:

Response from Cov Cath student who says he was present at the event in question in Washington.@Local12 pic.twitter.com/nqLD1pJY2u

Enter the boy with the most punchable face in America. I do not know this young man’s name, and I wouldn’t share it if I did, but he is in dire need of some sympathy. Simply for wearing a MAGA hat and having a face that only a mother could love, an awkward young man is being called a hateful bigot and other horrid things I’d rather not repeat.

I don’t know who you are, young man, but God bless you and stay strong. And grow a mustache as soon as possible.

If Nate Philips were someone else, I would have a major bone to pick with him. But based on the interview below and his disputed recounting of the event (he said he heard chants of “build that wall” but no evidence of this exists and also claimed punchable face boy blocked him from moving forward and from retreating, which is absurd), I must assume that he is not completely with it:

Thank you to @VinceSchilling of @IndianCountry and many others who identified the proud Native man who is being harassed. He is Mr. Nathan Phillips. I’m reposting this video from “ka_ya11” on IG. This man’s words pierce my heart. The grace. The wisdom. The hope. pic.twitter.com/BKOA40SVq5

Philips is a man and is responsible for his words and actions, but The Washington Post is the real villain here. Instead of reporting on what the video evidence suggests, they simply quote Philips’ version of the story. This is despicable, but it’s also journalism in 2019. So what do you expect?

So apparently a lot of the outrage stems from The Washington Post taking Phillips' version and printing it, despite it being contradicted by the video. He approached the kid, not the other way around. And he could have gone around him or turned around at any time. pic.twitter.com/24sehzm66j

If anyone is to be called a bigot here, it’s a group of black Isrealites who shouted conspiracy theories and racist and homophobic epithets at the Covington boys, though simply ignoring them is likely the better way to go. Against my own advice, here is a longer video of the confrontation with the black Isrealites taking center stage about four and a half minutes in.

Instead of white supremacists inspired by President Trump treating a Native American serviceman like garbage, we have some dumb boys (redundant) having fun and being smeared by a psychotic gang of silly adults.

The anti-Trump mob is not interested in facts or reality. They will not get over their electoral college loss from over two years ago, and they will be happy to ruin lives for the sake of misguided vengeance until someone else is commander-in-chief. I predicted this would last a few months after Trump was elected, but I was wrong.

Something can be done about this. But because the mob is spreading the fake version of this story with chilling haste, I do not know what it is at the time of publication.

Birth of an NPC Hate Mob

2 thoughts on “Birth of an NPC Hate Mob”