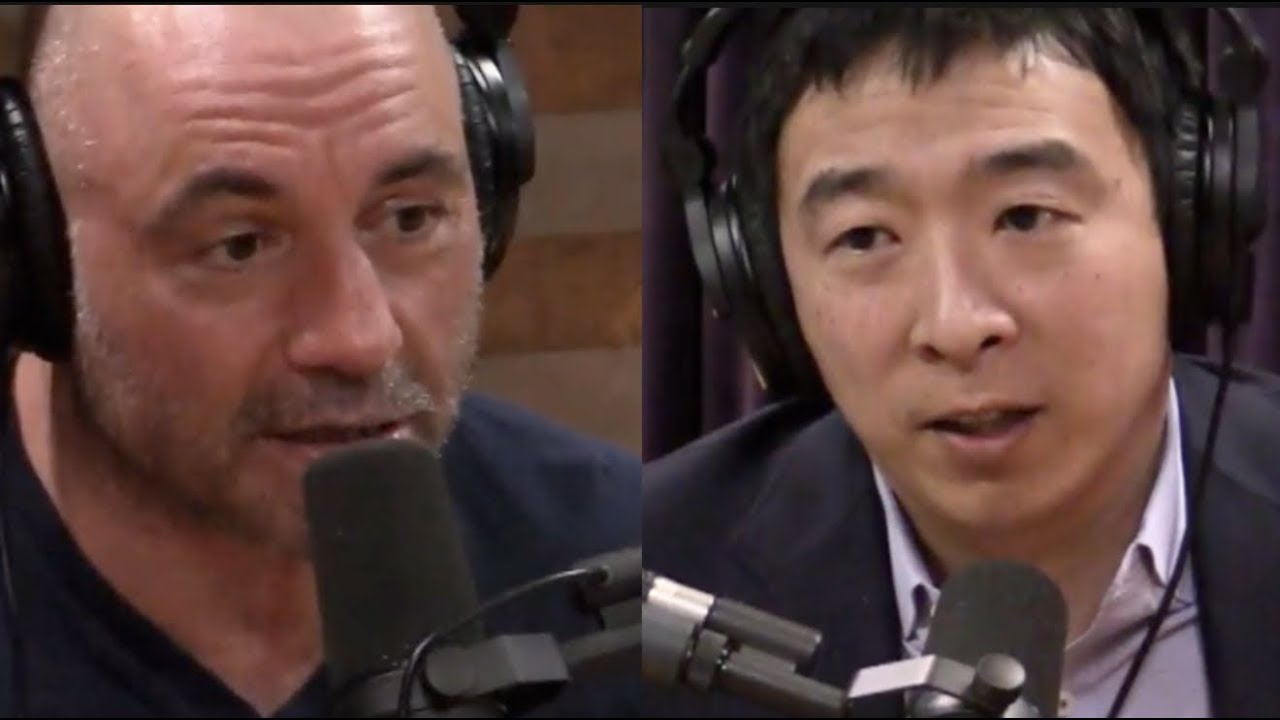 If there’s one welfare state proposition that makes Libertarians reconsider their anti-government position, it might be UBI (Universal Basic Income). The concept of UBI is simple: every person in a given country gets cash from the government every month. Rather than rationing food, energy, or clothes like a purely Socialist society, a nation with UBI allows those on the receiving end to decide which of their needs should be met the same way people who earn their own money do.

Andrew Yang is a businessman running for the Democratic Party’s presidential nomination, and UBI is his signature issue. I hadn’t heard much from Yang until his recent appearance on the Joe Rogan Podcast, but have heard that he’s a refreshing voice in the Democratic field. While he seems like a nice enough guy, Andrew’s justifications for implementing UBI are easily discredited.

A phenomenon Yang hones in on to promote UBI is the supposed automation of jobs which, he says, is not only on the horizon, but in its midst right now. There are many problems with this claim. The first is that manufacturing jobs, a main source of concern regarding automation, are on the rise and had been for several years even before Donald Trump was elected president: 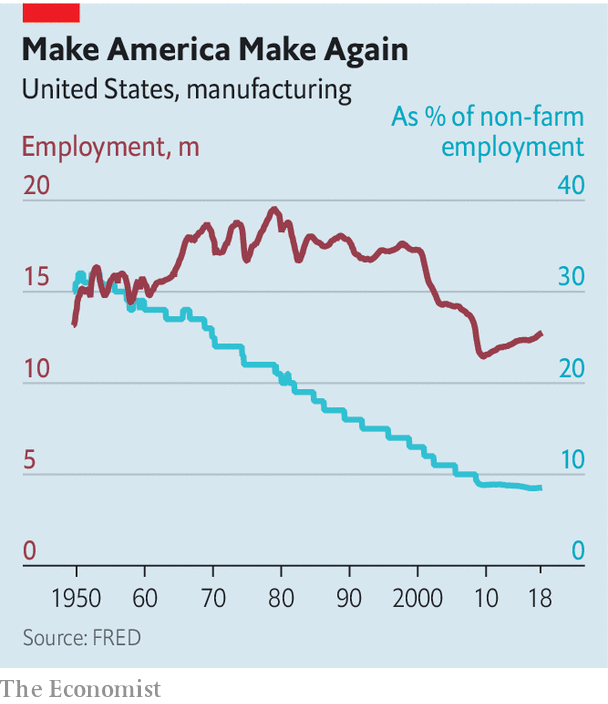 With Trump doing a laudable job of deregulating the domestic economy and signing corporate tax reductions into law, there is no reason to expect this trend to reverse in the near future.

“In the next decade, we’ll need 890,000 drivers to keep pace with growth and demand for freight transportation. Americans are used to getting what they want with the click of a button, but this expectation of door-to-door service will be increasingly difficult to fulfill if we can’t get more drivers behind the wheel.”

I have two cousins who are truck drivers. It’s not exactly a glamorous occupation. They spend weeks at a time away from their homes and families, and they sit at the helm of a big rig on the same wide open roads day after day after day. Sitting idly for so long is detrimental to a person’s health, and 5,000 people die in trucking accidents every year.

The other problem with Yang’s trucking claim is that it is based upon the false premise that self-driving vehicles are in the fast lane and ready to run drivers off the road. On the contrary, self-driving technology is nowhere near ready to take over the world as it is developing at an even slower rate than predicted. And even when driverless cars and trucks are ready to hit the road, it’s not as if people are going to ditch their manually operated vehicles at the drop of a hat. People don’t trust AI, and they also love being in control of what they’re doing. Driverless vehicles will have to compete with traditional ones, and winning that battle will be a traffic jam of a fight.

Even if we imagine that an earth-shattering breakthrough occurs tomorrow, and consumers widely decide they’re ready for an AI escort, trucking jobs are not only safe, but might even reap unseen rewards. Self-driving vehicles are not exactly as the name suggests. For the most part, a human driver will need to be present in case of emergency or for any number of other reasons. This will be especially true of self-driving trucks, so at least one occupant will need to be inside the vehicle at all times. The negative aspect of this is that the wages truck drivers earn could be diminished via the less demanding workload. But as mentioned earlier, driving a truck is a pain in the butt. Instead of being zeroed in on the road for so long, drivers will be able to stretch their legs, read a book, talk on the phone, or even search the web for a new or additional job. And since the labor will be so much less strenuous, many unskilled individuals looking for work may reconsider taking  stab at driving trucks. Young people still finding their way could spend a few years earning some money and getting an up close and personal look at the US of A. Driverless trucks would create jobs without killing them, and keep goods at the low prices every American desires.

In the portion of the two-hour interview I watched, Joe Rogan does a solid job of pushing back on Yang’s ideas. One of the most important questions Rogan asks is how much UBI is going to cost and who is going to pay for it. Yang gives a straightforward answer, saying that UBI would cost $3 trillion a year. He then explains that it would not really amount to $3 trillion a year as individuals already receiving roughly $1,000 per month in government benefits would not be entitled to any more money. An individual getting $700 in benefits would get $300, and one receiving no benefits at all would receive the full $1,000. Yang estimates that the added cost would amount to under $2 trillion.

This is a seemingly moderate proposal with an extreme consequence built into it. On the bright side, Yang’s iteration of UBI could actually encourage people to get off the government breadlines and take care of themselves enough to get onto the government dole. In a perfect world, people would take more responsibility for themselves to such an extent that Medicare, Medicaid, Social Security, and unemployment benefits would wither away as a cost to taxpayers. This could be a boon to human capital while also making way for consumer-driven market forces to improve the conditions of healthcare, insurance, and job markets.

Milton Friedman, whom Yang calls a supporter of UBI in the interview, did indeed flirt with the idea. But unlike Yang, Friedman’s plan, dubbed the Negative Income Tax (NIT), would immediately replace the rest of the welfare state. Friedman did not want the NIT to become an addition to the alphabet soup of bureaucracy already in Washington, but rather a simpler, cheaper, and less intrusive way to provide a safety net to those unable to care for themselves. When Friedman realized support for his version of UBI was not what the rest of its promoters had in mind, he rightfully abandoned it.

One of Friedman’s wittiest quotes is that there is “nothing so permanent as a temporary government program.” The problem with Yang’s intention to implement UBI without eliminating other programs is that all are bound to expand. Once the UBI can is opened, the worms will crawl. And there is nothing stopping the amount of money UBI recipients demand from reaching impossible depths. UBI would be certainly be permanent, and certainly permeate.

Yang’s answer to the funding part of Rogan’s question is even worse. This is mainly because of Yang’s proposal to implement a Value Added Tax (VAT). The way a VAT tax works is by taxing exchanges at every level from production to wholesale to retail and everything in between. Simply put, a VAT tax is an all-encompassing sales tax.

While some Libertarians like me might jump at the idea of replacing the corporate and income taxes with something like a VAT tax, Yang’s VAT fails to relieve us of other taxes and contradicts an alleged benefit of his UBI plan. Yang, in a claim common among the anti-supply-side crowd, says that putting money in Americans’ pockets will be a boon to business and job creation because recipients will spend the money and keep the economy rolling. Regardless of whether or not this claim has any merit, the VAT tax would undermine consumer spending like nothing before. When a tax is levied, the cost of paying it is passed on to the next guy in line. If you tax bread sales at 10%, bakers will charge sandwich artists some of that rate by increasing bread prices. And consumers will see the price of their lunch go up at the deli counter too. The individuals who incur cash from UBI will not be as willing to put their money back into the economy when everything around them is becoming more expensive.

Yang is certainly not stupid and not all of his ideas and analyses are wrongheaded. He points out the futility of having the government tell displaced factory workers to #LearnToCode, and also highlights current injustices taking place in our criminal justice system (though the way he ties this to UBI is far-fetched). But all-in-all, Yang’s plan for UBI is just as bad as any other government scheme to turn the race of life into a walk in the park. Our country will be far better off if Yang forgets about politics and goes back to creating jobs on his own.